David Schiesser’s art is both figurative and abstract, simultaneously presenting and questioning nature, science and the relationship between humans and animals.

OM is David Schiesser’s first exhibition at Pop;68, the project space by Ruttkowski;68 gallery. It presents his latest works: coal and lacquer paintings on canvas as well as sculptures made from concrete. After studying art in Offenbach — at the Hochschule für Gestaltung taught by Eike König and Manfred Stumpf — Schiesser decided to work from Berlin part-time. He shares a studio there with former fellow student Malte Zenses. Located outside of Berlin in the middle of an industrial area, the spacious studio allows him to create the large-sized works displayed in OM.

OM, the title, refers to Schiesser’s penchant for the esoteric. Today, the sacred syllable of Hinduism, Buddhism and Jainism is most famously used as a mantra in meditation. According to Hinduism, Om is a primordial sound. It is associated with the creation of universe from nothing.

Creation from nothing is a key point of David Schiesser’s art. He works with a minimum of materials and appears to refer to the Stone Age as a source of inspiration. The people featured in David Schiesser’s works are usually naked or scantily dressed, for example in nothing but a sunhat, as seen in the dyptich Auf dem Weg zu Entstaltung. By choosing items that obviously don’t date back to the Stone Age, Schiesser makes a clear reference to today.

The animals are another subject that recall cave paintings. Offerte am Grand Canyon is a classic example. It consists of two canvases showing naked people and animals that could be horses. The scene could depict a hunt or a horse ride and again, resembles a cave painting. Another clear reference is the color of the paintings. Schiesser works with black coal or red lacquer on canvas. And even when he paints something from today, it still looks stone age. Coz we focus, for example, a 70 x 100 cm canvas showing a highway from the driver’s perspective, combines a contemporary subject that also seems alienated from this time.

Schiesser’s works also remind us of an abstracted Matisse. What was a color field with the French painter is reduced to black and red lines with Schiesser’s brush. The lines mark the border and imply what would have been colored with Matisse. 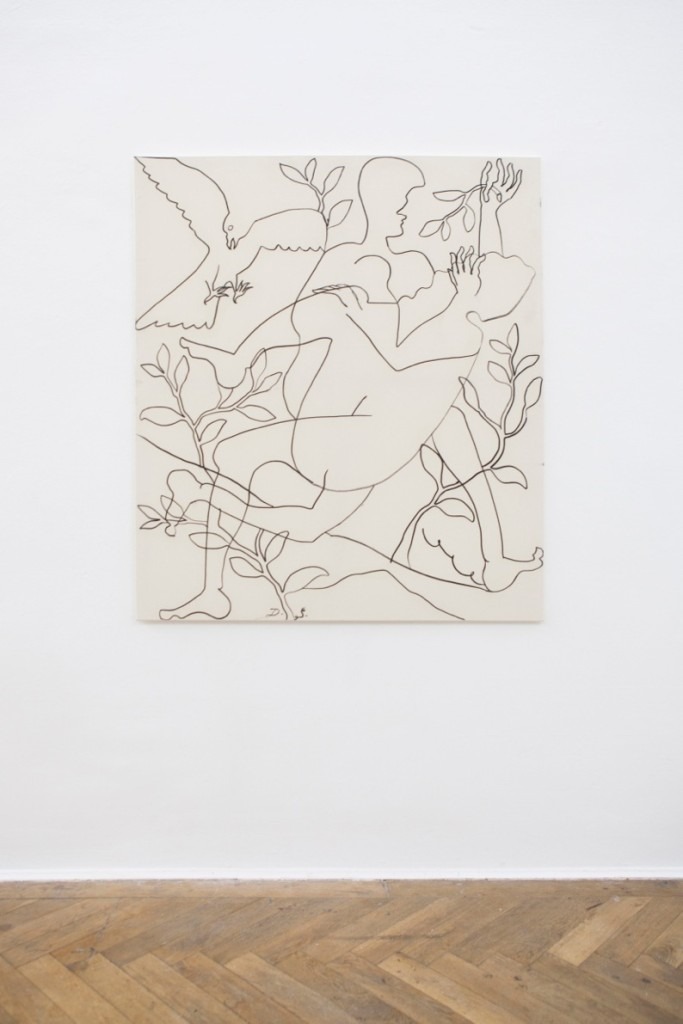